Schrödinger’s cat puts us in a quite a pickle of a situation. How is it possible to tell if it’s dead of alive? Open the box, yes, but who really wants to open boxes possibly filled with hydrocyanic acid, poisonous enough to kill a small mammal? Opening the box would be brainlessness of Pandoric proportions. But, much like Pandora, humans are insatiably curious creatures. And so we have opened the lid on a topic most virologists believed to be sealed for all eternity: is Schrödinger’s virus dead or alive?

When you think back to your biology classes, some of you might remember the rules Organism X had to obey in order to be classed as “living”. For those that had wandered off to get more chalk for the blackboard, or were simply asleep in class, here’s a reminder. In order to classes as ‘living’, Organism X must

If you were present mentally as well as physically during that class, you might remember the ensuing discussion. “Which organisms could therefore be counted as ‘living’?” At some point your teacher might have raised a pointed finger, looked at you with a victorious smile and inquired: ”You seem to understand the basics. Tell me, what does this make the virus?” And if anyone answered “a living organism”, they were bound to get in trouble for not paying attention. Viruses are incapable of moving on their own, and are carried by the environment to their host, where they cannot reproduce independently, but have to steal reproduction machinery from their host to make the baby-virus-magic happen. Even though they act very much like a living organism inside their host, they wouldn’t check off a single box outside of them. At least, that’s what my own teacher told me some years ago.

Viruses have gone through a tumultuous classification history. They were initially only thought of as poisons, and named after the Latin root of the word ‘virus’ (poisonous slime, how charming). Eventually, based on our knowledge of larger bacteria, scientists assumed viruses were just ordinary living organisms. They’d never seen them since were too small to study under a light microscope, but easy enough to track, seeing as they spread mercilessly and visibly. Then, in 1935, Wendell M. Stanley came along, and crystallized the first virus – the Tobacco Mosaic virus. And try as he might, all he could see was a simple biochemical, missing all the essential parts to keep the metabolic (food à energy) system of a cell running. He received a Nobel prize for his work in the field of chemistry, and viruses were reduced to their current standing as interestingly parasitic, but very, very dead molecules.

Nowadays, answering your teacher’s question has become infinitely more complicated. Viruses are the ultimate Schrödinger’s cat of modern biology. Are they dead or alive? And why in the world has that box been opened again?

The reason to open that box were Megaviruses. The first one we discovered was the Mimivirus in 2003 (La Scola, Audic et al. 2003). It had actually been discovered in 1992, but because of its very large size, and the fact that we’d never encountered any viruses of such size before, it was mistaken for a bacterium – hence the name MiMivirus (Microbe Mimicking). It took over 10 years to correct the bacterium blunder, and since then many more megaviruses have turned up. Scientists have named them in increasingly similar and sillier ways, like Mamavirus and Moumouvirus, much to the annoyance of their colleagues trying to keep track. In 2011 a lab group begged their colleagues to finally agree on a more sensible system in a paper on the discovery of a virus that was even bigger than the Mimivirus itself, Megavirus Chilensis.

The discovery of the Mimivirus showed us not only that viruses of incredible size exist, but also that they do bring parts of the molecular parts needed to get the reproduction machinery running themselves. It has over a thousand genes, and many of those are similair to the ones that can be found in regular living, cellular organisms.

This of course then led to a question, which can nearly be dubbed philosophical. Have viruses crossed the threshold back into the land of the living? Why does it matter to include them in the tree of life? And how would this shape our understanding of evolution?

Currently two theories are competing to explain how viral evolution may have ended up with Megaviruses. First of all there’s the “Reduction Theory”. Scientists championing this idea claim that all organisms (this includes viruses) have had one and the same ancestor at some point in their history. LUA, the Last Universal Ancestor, followed two very different roads down the evolutionary woods. One went towards more complex life, and the other ended with an organism so simple, it was denied the description ‘living’ and instead labeled as ‘nothing more than biochemicals gone rogue’. According to the reduction theory, LUA simply dumped every part of its genetic code that it didn’t absolutely need to survive. Why keep baggage that’s weighing you down (by possibly mutating in a fashionthat kills you), when you can simply steal from your neighbor, the hoarder? 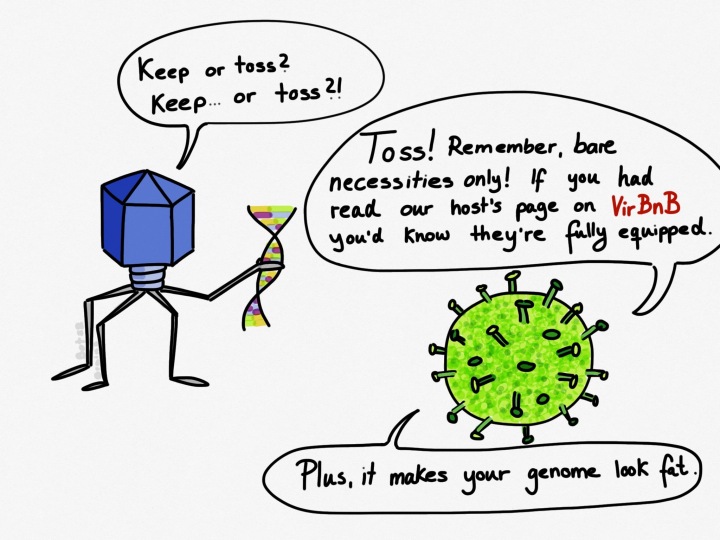 The opposite of this top-down approach is, you’ve guessed it, Darwinian evolution as we know it. According to the “Fourth Domain of Life” theory, viruses are just as much a part of the web of life as the other Big Three: Bacteria, Archae and Eukaryotes (that’s us). Evolving on their own, they’ve been happily playing the Evil Villain role, living inside the others as the perfect parasites. We wouldn’t say parasites aren’t animals – why would we say that cellular parasites are not living cells themselves?

Both these theories are based on viruses having at least started out as living organisms. Previously the “Great Escape” theory had been the best explanation for these rogue biochemicals. Genes had escaped their own individual organism, and had in some way found a way to build a capsid to shelter themselves from the environment. The Megaviruses overturned this theory in large parts by showing a huge number of independent genes that no other cellular organism had. The genes couldn’t have run off on their own – they didn’t come from a bacterium in the first place!

The change in tone towards the tiny, unwelcome visitors has been developing slowly, but surely in the field of virology. For every paper titled “Ten reasons to exclude viruses from the tree of life”, there’s one out there called “Reasons to include viruses in the tree of life”, fittingly an answer to the first, both published in Nature in 2009. I love how scientists can get into written fistfights in super high impact journals. It’s as entertaining as celebrity divorces in the tabloids, but nerdy!

Why is this shift in thinking important? Due to their status as the living dead (or the dead living?), virus evolution as a research topic has been frightfully neglected. Which is not only a pity, but a dangerous path to tread, for there are few relationships more intimate than that between a virus and its host. Not only do they inhabit our cells, many of them have shaped our current DNA by inserting theirs into ours. Seeing as a dead host is quite a bad host, they hide their murderous abilities by defending us against themselves through sharing their DNA. Their evolution is our evolution. If we ever want to fully understand how humans and the diseases that ail us came to be,  we need to start taking viruses into account. And the best way to do that is to give them a break, to live, and to let live.

One thought on “Schrödinger’s Virus – Dead or Alive?”

What Once Was New